After the success of Future Fest 2022 on May 13-15 in Islamaba, Arzish Azam was invited to represent Pakistan as a speaker at BSV Global Blockchain Convention at Grand Hyatt Dubai held under the patronage of His Highness Sheikh Saud bin Saqr al Qasimi, Member of the Supreme Council – Ruler of Ras Al Khaimah.

Future Fest is the largest tech conference of expo of Pakistan, attended by big web3 companies such as Binance, Epic Games, Kucoin, BitOasis and BSV. According to Binance Pakistan’s Growth Manager Humza Khan, “Future Fest helped bring some of the brightest minds in Pakistan together under one roof”.

Arzish took the stage explaining that as the 5th largest country in the world, Pakistan is currently housing a booming tech industry, and with a tech base as big as its current one, Pakistan cannot afford to miss out on the blockchain opportunity – especially due to its geographical closeness to Dubai which now serves as the ‘crypto capital’ of the world.

Arzish further said, “There is a future for crypto everywhere and Pakistan is the same; more than 2 million people are investing in crypto and this is happening while there’s no clarity on whether it’s legal or illegal.”

He lists down a number of challenges faced by Pakistan’s current crypto users since there are no formal channels to go through, “still, with so many hurdles if such a large number of people are investing in this, then there is public demand for it and the policy makers and regulators are also now trying to understand and grasp the concept of how crypto or blockchain, overall can benefit Pakistan’s economic growth.”

Arzish Azam is a the leading advocate for blockchain in Pakistan, he is the Former Adviser to the Ministry of Science and Technology on Emerging Technologies where he hosted Pakistan’s first ever Blockchain Summit inviting BSV Blockchain to Pakistan along with a meeting with the President, where the premier announced the call to form a National Blockchain Strategy.

Founding President of the BSV Blockchain Jimmy Nguyen started “Our Global BSV blockchain delegation was highly impressed by the energy and vision of Future Fest: to empower Pakistan’s young generation to fulfill their and the nation’s technology potential as if there are no limits upon what they can achieve.”

The legality of crypto trading is unclear in Pakistan, but still the crypto market has been rapidly growing. According to some statistics, from March 2021 – 2022, Pakistan alone has traded around $18.60 billion in cryptocurrency and has as many as 20 million users whereas registered investors in stock exchange is merely 220,000.

Arzish Azam stated in his closing remarks that since this industry has very high public demand and can help Pakistan’s economic growth, we should all figure out a way to use it for Pakistan’s benefit.

The government’s sentiment to support emerging industries was shared by Finance Minister Miftah Ismail in his keynote concluding the final session of Future Fest on 16 May called “Roadmap to the Future”, he stated that the Government should try and stay away, let them be but not try to regulate them and certainly not try to tax them. 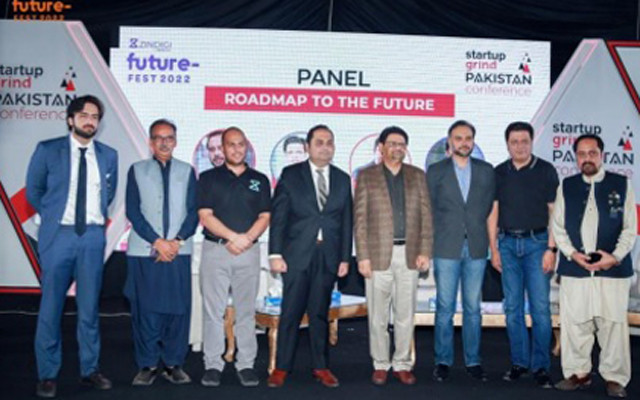 This session also featured a discussion between Dr Murtaza Syed – Governor (Deputy) State Bank of Pakistan; Tariq Malik – Chairman NADRA; and Imran Haleem Shaikh, COO – JS Bank, and Noman Azhar – CDO JS Bank and Head of Zindigi on how the tech industry can provide financial stability to the youth with the help of government and private sector initiatives and support.