The 121’4” KOJU is the first yacht in Benetti’s new Motopanfilo 37M series, and is a contemporary reinterpretation of the yachting tradition and lifestyle of the 1960s. David Bowie, the rockstar f the 1960s -70s owned a yacht similar to this, also built by Benetti.

Benetti is the Italian ship and boat building company, whose yachts in this series are defined by the builder as “Yachts Suspended In Time.” Thus far, Koju has won multiple awards for its exceptional design, combining 1960s style with 2022 mechanics. And happily, Koju is available for Summer charter from IYC, the International Yacht Company. 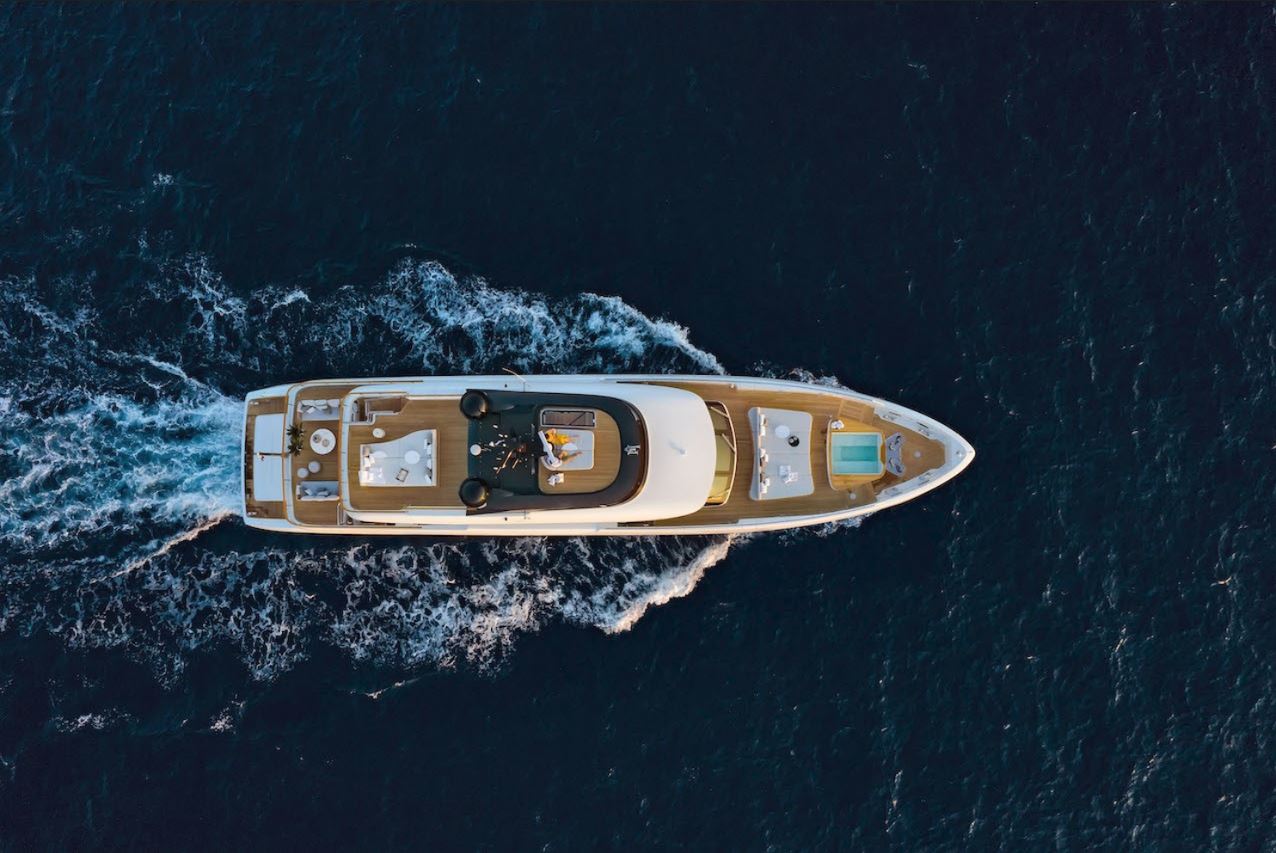 The exterior is described as clean-cut, with tapering form with plentiful exterior volume. The stern, considered a 21st century revamp, features a spacious beach club and large bathing platform, while the tender garage has been tucked away to the side. The upper deck features a seating area, a formal dining space, sunbeds and a Jacuzzi.

Throughout the interiors, a palette based on shades of light wood, white and blue, immediately brings a seafaring mindset into awareness, but reinterpreted in a contemporary way. 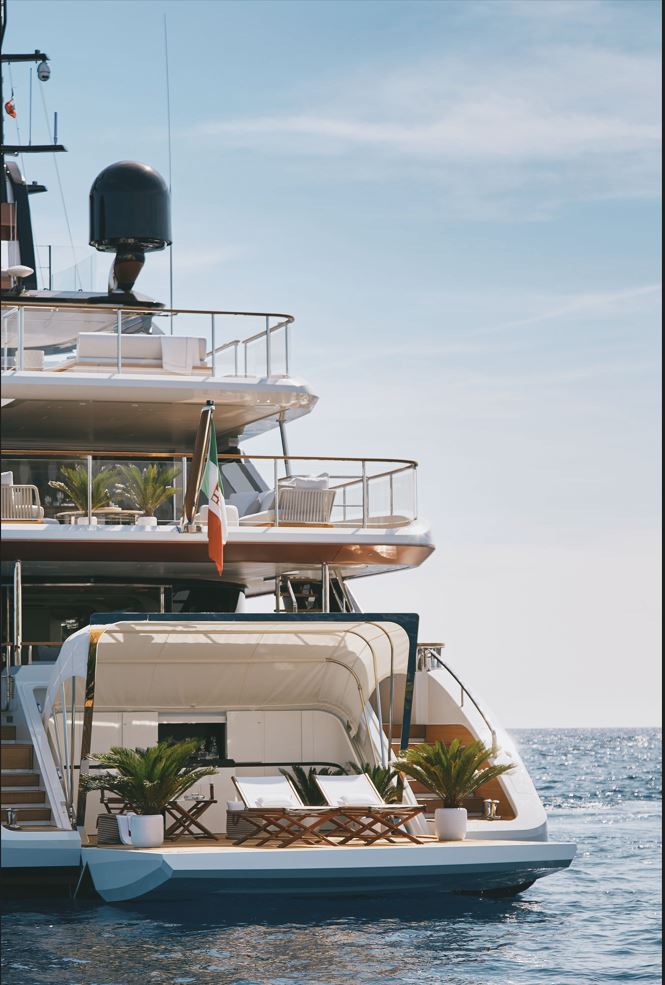 This 2022 reinterpretation of a 1960’s style is an achievement that combines the past with the present, an achievement, and has won three major awards thus far that celebrates innovative styling, reminiscent of an earlier time full of nautical adventure. The Kojo is a displacement yacht, meaning the hull allows the yacht to move through the ocean, displacing water, rather than riding on top of it in the style of a planning yacht. The dynamic stability of a displacement yacht makes for more comfortable cruising, with superior seakeeping when compared to fast/planing yachts. 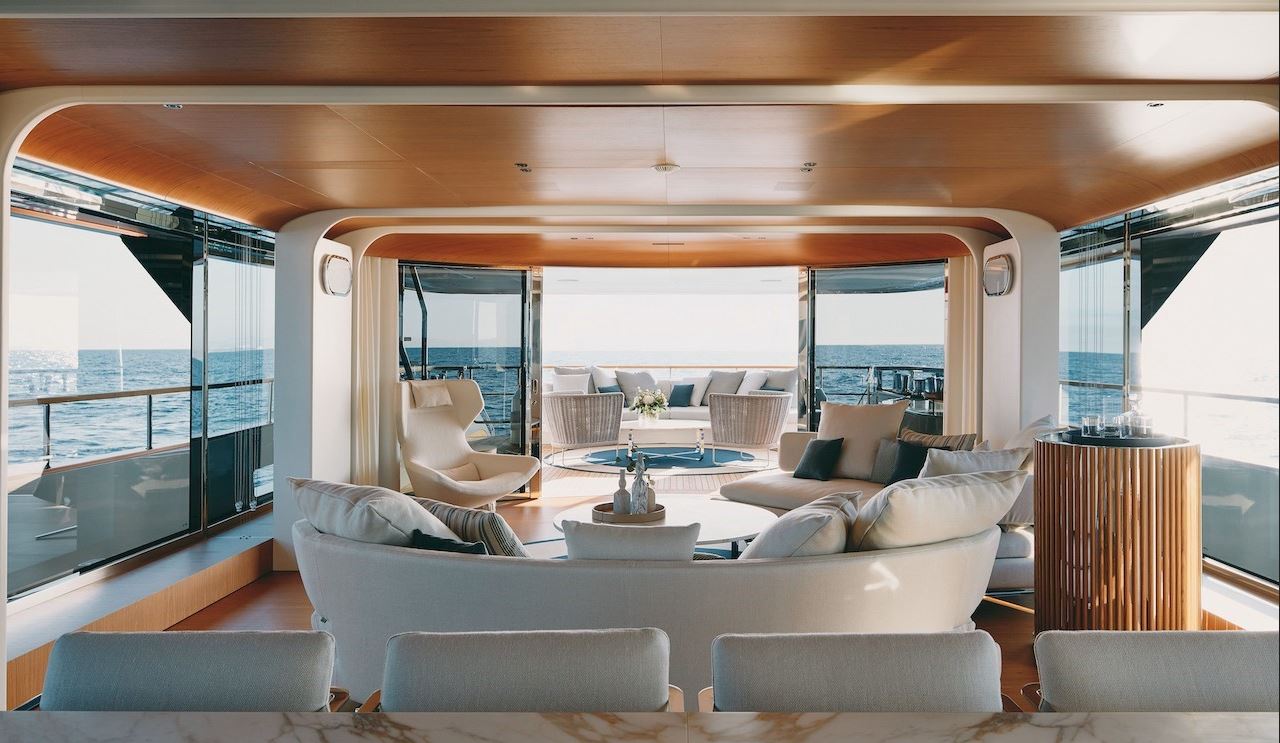 The latest round of accolades is from Robb Report’s Best Of Best 2022 Issue, where KOJO was included in the Best Of Best Luxury Yachts category as well as at the 2021 World Yacht Trophies in Cannes, where it claimed the Best Innovation award and at Boat International’s Super Yacht Awards in London 2022, where it won the award for ‘Semi-Displacement or Planing Motor Yachts – 35m to 39.9m’.

The long horizontal lines are broken with simple, repeating, 45-degree cuts for contrast. The design also maximizes the strengths of a displacement yacht and the volume is well used in an appealing exterior deck arrangement. The salon features warm, light wood on the floors and curved ceilings while touches of white and blue are seen throughout. The cabin walls also follow the gentle curve of the hull, embracing the 1960’s design of the yacht.

Kojo’s accommodation is for a total of 10 guests with an owner’s suite at the bow of the main deck and four guest cabins on the lower deck.

It is believed that Kojo’s, impeccable standards of construction were key factors in the judges’ decision. Created by Francesco Struglia working alongside Benetti’s in-house designers, these were well connected to the outside world through huge windows, while long sight lines added to the impression of larger size and distinct, marine luxury.

Many other aspects of the yacht also drew admiration: the engine room was spacious, with good access to all areas for maintenance and service, while the combination of efficient hull form and diesel gave Kojo a modest top speed of 17 knots and an enviable range of 3,800 nautical miles at 10-knots.

Benetti describes the Koju yacht as “an elegant design that evokes memories of the best nautical traditions. The layout, styling, proportions and clever outdoor living spaces” convinced the judges of the boat’s ability to live and succeed in the competitive marketplace. They singled out the “looks, lifestyle, and price point” of the Koju, with one judge stating: “It’s very easy to see why this yacht hits the sweet spot.”

At present, the yacht is available for charter from IYC, for Summer sailings to the Bahamas, the Caribbean, and beyond.

This is Aria SF! – a 150ft Megayacht with Limitless Boundaries

pakistanahead_95 - November 18, 2022 0
The project will require wind and solar energy to power a 700MW electrolysis plant

Pop and pomp as World Cup kicks off but Qatar poor...